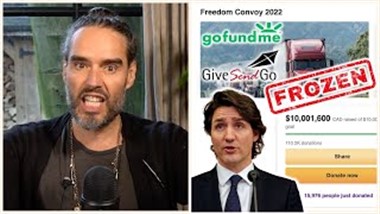 Tyrannical Tools Used By Dangerous Fools To Further Enslave Us All

This is scary stuff!

“Whilst Justin Trudeau has bowed to pressure and revoked the emergency powers he invoked just over a week ago, the Canadian government is now making financial aspects of the Emergencies Act permanent.”

Certain financial restrictions will be in place permanently.

Slippery financial movements happening that bring us closer to a kind of technocratic tyranny.

He went on to describe the events of what is happening in Canada “under the auspices of liberal democracy.” And it’s not being done through the people’s representatives but by executive decree.

Canada’s Deputy Prime Minister Chrystia Freeland wants to make permanent the invasive financial surveillance system introduced as part of the “Emergencies Act” to crush the civil liberties protest. Freeland had announced the initial powers earlier this week to freeze the bank accounts of those who support the protests. This order covers both personal and corporate accounts.

“We determined we need additional tools.”

RB. This describes what a dictatorship is. What democracy? Whose “we”? What do you mean by determined?

Some of those tools we will be putting forward, measures to put those tools permanently in place.

Deputy PM Chrystia Freeland, said “some of these other tools, like the sharing of information between law enforcement and financial services, and their requirement of financial services to be reviewing their accounts proactively.”

The authorities of FINTRAC I believe do need to be expanded to cover crowd sourcing platforms.

Insurance on trucks that participate in these illegal occupations and blockades will be suspended.

RB. All right. We’re shutting you down from every angle. So those of you who have ever considered there were conspiracies between the government and financial industry and insurance is some kind of scam and that the government just looks for ways to create power and control, telling you all the time you’re free, you’re free to do as we tell you. Now you have a further piece of evidence. They shut down the insurance of the trucks, the shut down the funding of the protestors, they closed down the bank accounts of the people who support it. That may be many things but what it is not is liberal democracy.

RB. Tools can be used for good but tools can also be used for bad, says Russell Brand. I feel like what they’re recognizing is bloody hell this trucker movement that escalated fast and they can fund it using crowd fund platforms and they can communicate using social media. Oh no, all of our tools of surveillance and oppression are being used to create power for the people. Which by the way that’s what democracy is meant to mean. Populism isn’t a shameful thing. Populism means you are in charge of your life. And what they’re doing is. Oh, no, you jolly well don’t. This is where the old tools come in handy. Can you see the utility and plasticity of technology in this discourse emerging when technology can be used to create digital id and vaccine passports systems of monitoring and surveillance. Technology good two thumbs up. When technology is getting used to empower people, get people together to create new narratives, to fund opposition to the government to prevent what I would consider to be comparable to a kind of rolling tyranny technology bad, two thumbs down for technology now…. all they have to do in the future is label anyone they want being a threat to the ideals they’re setting out. The measures are there, ready, waiting. They’ve just armed themselves…. But when that is concomitant to the closure of and freezing of bank accounts, shutting down crowd funding, determining whether or not a protest is malign and judging it as such in order to foreclose it. That is literally the building blocks of tyranny. That’s what it would look like now. That’s a misuse of power.

Those tactics pioneered against Wikileaks – excluding dissenters from the financial system.

…. and coercing tech companies to deny them internet access without a whiff of due process – have now become standard weapons. Trudeau’s government seizes and freezes bank accounts with no judicial process.

Centralized powers are coalescing in alignment and in agreement with corporate power to limit the ability of ordinary people to protest about the condition of their lives.

Whether or not there are extremist elements to a protest or indeed any large group of human beings. You can see why it’s favorable to amplify that narrative, if you want to oppose and shut down any form of dissent. And that’s exactly what’s happened here.

Kicking people off social media deprives them of the right to speak in our increasingly online world. Locking them out of the financial economy is worse: It deprives them of the right to make a living. We have seen how cancel culture can obliterate one’s ability to earn an income, but now the cancelled may find themselves without a way to pay for goods and services. Previously, cancelled employees who would never again have the opportunity to work for a Fortune 500 company at least had the option to go into business for themselves. But if they cannot purchase equipment, pay employees, or receive payment from clients and customers, that door closes on them, too.

Whatever you think about the pandemic it is being used to increase power and control in important ways that may never again be undone.

I think these systems are coalescing and working in unison to create an ever encroaching technocratic dictatorship that, as the conspiracy theorists always told us, will become a centralized global government.

Liberty is lost through complacency and a subservient mindset. When we accept or even welcome automobile checkpoints, random searches, mandatory identification cards, and paramilitary police in our streets, we have lost a vital part of our American heritage. America was born of protest, revolution, and mistrust of government. Subservient societies neither maintain nor deserve freedom for long.

Things to be grateful for….

Why does the world condone an evil empire?